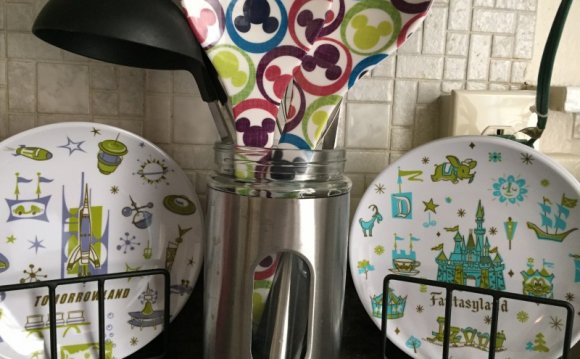 Len and Laurel Testa, authors of the Unofficial Guide to Disneyland, decided to incorporate a little of their livelihood into their 1968 home in Greensboro, N.C. Their new place, architect Gerard Grey's Charles A. and Fannie Fountain Residence, already boasted much in the way midcentury flavor, including pocket doors and what is now hilariously anachronistic technology, like a General Electric system system that "controlled lights throughout the house through a series of dials and switches." To enhance the home's Jet Age (or "retro-future, " as the Testas write for Boing Boing) flavor, and to acknowledge the couple's enthusiasm for and expertise in Disney parks, the pair hired a team of designers to build a kitchen that mimics Walt Disney World's Space Mountain. What's inside? Read on, below.

The breakfast area is a swoosh of white upholstery circled around a table backlit by LEDs. Above hangs a period-perfect Sputnik light fixture that looks vaguely like an exploding star. The walls are chartreuse, and the plasma displays in the foreground mimic the violet glow from the table. And yes, the