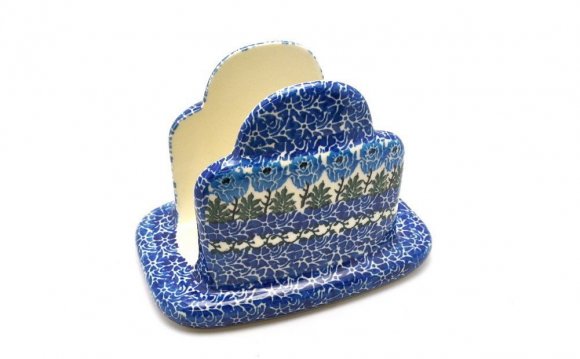 Polish pottery, as we know it today, began as folk art hundreds of years ago in the German province of Silesia. It originated in a small German town named Bunzlau, which is now the Polish city of Boleslawiec (pronounced). Located on the Bobr River in Southwest Poland, Boleslawiec is the exclusive spot where this traditional ceramic art is produced.

The first pieces of "Bunzlauer" stoneware date back to the 1500's, however the area has a history pottery making as early as the 7th century. Farmers would often make this pottery in the winter when it was too cold for outside work. The first examples of this stoneware were crafted by hand, decorated using potatoes as stamps and then glazed with a chocolate colored material. Even at this time, each piece of stoneware was an individual work of art. It wasn't until the end of the 19th century that artists began to introduce new, more elaborate lines of pottery intended for dining and display. Then in 1898, the government established the "Keramische Fachschule" (Ceramic Technical Training School) to foster development of the art.

In the early 1900's, Bunzlauer pottery experienced a renaissance that introduced the "Jugendstil" movement-the German equivalent of Art Nouveau. During this time, the "Pfauenauge" or "Peacock's Eye" became the universally accepted trademark decoration of the stoneware. In response to the Art Deco movement, the 1920's brought a trend towards more colors. However, during World War II all the ceramic plants were eradicated and production came to a stand still. It wasn't until the 1940's that efforts began to revive the ceramic art. Today in the small village of Boleslawiec Poland, skilled artists still individually handcraft and hand paint each piece of pottery using a hand-stamping technique and free-hand design.

Polish pottery is created from white clay that is found only in the Boleslawiec region of Poland. The pottery is fired in coal and gas ovens at temperatures in excess of 2200 degrees Fahrenheit with a glaze that is lead and cadmium free. Polish pottery is known for it's versatility in that it is safe for use in the dishwasher, microwave, freezer and oven. Also, Polish Pottery is resilient to abrasives making it durable and resistant to scratching or chipping. It is this combination of function and beauty that makes Polish pottery so appealing.