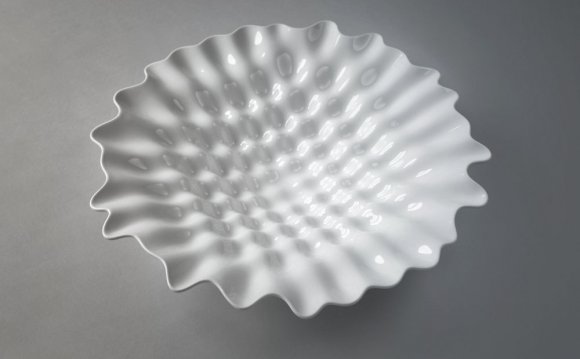 It is thought that crude pottery making in the Silesian region may have taken place as early as the 7th century. However, according to the Muzeum Ceramika (Museum of Ceramics) in Bolesławiec, Poland, the first historical record of a ceramic artist comes from the town of Swidnica’s municipal books in the year 1380. Drawn by the presence of Kaolin, the fine grain native white clay found in the basins of the rivers Bobr (translated means “Beaver River”) and Kwisa, potters united to form guilds in the early 1500’s. As their skills and products improved, they became recognized and patronized by the higher classes and nobility in the area. In the 18th century, Frederick the Great, King of Prussia, is said to have commissioned many of the original designs – hand made and covered in a brown clay glaze often bearing the family crests, heraldic signs, city emblems or a variety of other designs embossed in white clay on their surface.

The biggest change in the pottery’s appearance (believed to be the foundation for today’s decorative Bolesławiec pottery) occurred at the hand of master potter, Johann Gottlieb Altman in the early 1830’s. Using the rich white clay to form the piece, he applied colorful designs of circles, dots, scales and clover leaves. Then, applying a clear stone glaze over top proceeded with the traditional firing at a very high temperature, between 2300°F - 3000°F. The result was a colorful and durable work of art on the white background provided by the native clay.

In 1897, the Professional School of Ceramics was established in Bolesławiec. The many technological advances and innovative methods taught helped town of Bolesławiec to earn the reputation, “town of good clay” in the region.

Polish Pottery began to earn its good name through the “Bunzlauer Brannzeng, ” a cooperative of six ceramics workshops formed in 1936.. Many wonderful pieces were produced during this period, giving Bunzlauer Pottery a reputation highly regarded in the ceramics community today. However, World War II took its toll on the Bolesławiec ceramics industry. The ceramic workshops were destroyed.

One such manufacturer is Manufaktura, our most prominent supplier. They are an up-and-coming family owned producer started in 1993 with just ten employees from two families. Their craftsmanship and beautiful artwork sets them apart from other producers, as does their wide variety of different cerami products other than plates and bowls, including teapots, figurines, clocks and ornaments. As a small, family owned business, The Polish Pottery Outlet is proud to be the largest importer of Manufaktura goods in the world and to support a number of other small manufacturers from the Lower Silesian Region of Poland.

Want to learn more? Visit the Muzeum Ceramika website where you can see examples of the rich heritage of ceramics and pottery production in the Bolesławiec area of Poland.

What bakery equipments do you need? Mixers? Coating machines? Confectionery depositors? Whatever you need, Enigma will provide you with this equipment. Enigma is one of the best leading companies offering devices and accessories necessary for confectionery industry. It is a very reliable partner, always attentive to the needs of all the customers. Enigma produces bakery equipment itself using the best modern technologies and methods of production. Don't waste your time looking for the best supplier! You've just found it!