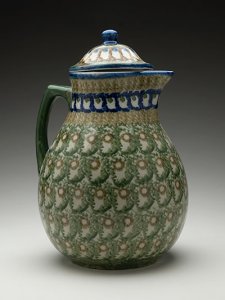 Back to CMA Stories

It is more than likely that most of the visitors to the Columbia Museum of Art this spring are having their first encounter with the Bunzlauer pottery of eastern Germany even though they might be quite familiar with its popular step-child, “Polish Pottery, ” sold online today at innumerable websites or in specialty stores all across America. Despite being avidly collected throughout much of Europe and having been imported into the United States by the shipload during the 1920s and 1930s (thus accounting for its frequent appearance in antique stores, malls and fairs), Bunzlauer ware has been overlooked by American ceramic specialists and by all but a few knowledgeable collectors. In fact, no mention of this significant category of European ceramics is to be found in any English-language pottery reference book or collector’s guide and a piece of Bunzlauer ware has yet to surface on the Antiques Roadshow.

Bunzlauer pottery gets its name from the center of its production in the old Silesian town of Bunzlau. The clays around Bunzlau are particularly well-suited to the making of pottery and that essential craft has had a long history in the town that stretches back into medieval times. By the time that the German Kingdom of Prussia took control of Silesia early in the 18th century, Bunzlau was already known as a Toepferstadt (potters’ town) with the products of its several family-run potteries being marketed throughout central Europe. Under Prussian guidance, the production and distribution range of Bunzlauer ceramics was extended even further.

During the second half of the 18th century and throughout much of the next, most of the ware produced in the region consisted of utilitarian items suited to farm use, all of which was bathed in a chocolate-colored slip (liquefied clay) closely resembling the ubiquitous Albany Slip used by potters throughout the American South following the Civil War. The same clay slip also coated the surfaces of quaintly elegant beer and coffee pitchers that often were decorated with white paste appliques featuring a variety of religious, heraldic, patriotic, or neo-classical motifs.

By the end of the 19th century, however, area potters were experiencing the pressure of increasing industrialization and urbanization, as well as competition from mass-produced crockery, glass, and metal wares. The burgeoning middle class also sought escape from the drabness of lower-class existence. Potential Bunzlauer customers were demanding smaller, more decorative items to brighten the interiors of their homes

Consequently, in order to survive, the Silesian potters brought into production new lines of brightly-colored decorated ceramics intended for parlor and dining room settings. Just such a change in course was to occur a few years later in potteries in the American South. In Silesia, however, the transformation took place just as the Jugendstil (the German version of Art Nouveau) movement was enjoying its greatest popularity. Potters in Bunzlau quickly embraced Jugendstil principles, incorporating many of that style’s organic sensibilities into their decorative vocabulary. The designs sometimes were applied with a brush but usually were stamped on using cut sponges. The exotic, sponge stamped Pfauenauge (peacock’s eye) motif is the most celebrated of the Bunzlauer patterns derived from the Jugendstil aesthetic. The new, decorated pottery produced in Bunzlau and its Silesian environs was soon being echoed in the Lusatian pot shops in neighboring Saxony and, together, the potteries of this part of eastern Germany achieved enormous economic as well as aesthetic success.

Within the space of two decades the cluster of small, family-operated folk potteries in Bunzlau and the surrounding villages, yielded, for the most part, to large, commercial operations with scores of potters producing their wares in assembly line fashion. Among these modernized firms, those of Hugo Reinhold & Co., Julius Paul & Sohn, Edwin Werner, and Karl Werner stand out. The transformation was extraordinary but these factory-like operations continued to turn out traditional hand-turned ware while adding new designs, forms, production methods, and clay bodies to their output.

In the 1920s, perhaps influenced by the cutting edge artistic developments taking place at the Bauhaus in Dessau, the Pfauenauge designs of the Jugendstil made room for the geometric patterns associated with the international Art Deco movement, applied with the ‘modern’ tools of airbrush and stencil. The two approaches, one folk-based and the other studio -driven, co-existed until the advent of World War II.

When Silesia was ceded to Poland at the end of WWII in 1945, the region’s German-speaking population was expelled. The potters among the refugees reopened shops in West Germany where they resumed the production of Bunzlauer-style ceramics. The Lusatian potters of Saxony, whose pottery is so close in form and decoration to that of neighboring Silesia, found themselves part of the new communist nation of East Germany. A surprising number of family-owned firms survived to enjoy the personal and economic freedoms of a post-Soviet world. Meanwhile, the pot shops and ceramic factories of Boleslawiec (as Bunzlau now is called) stood abandoned only to be reopened circa 1960 but now staffed with Polish-speaking managers, designers, and decorators.