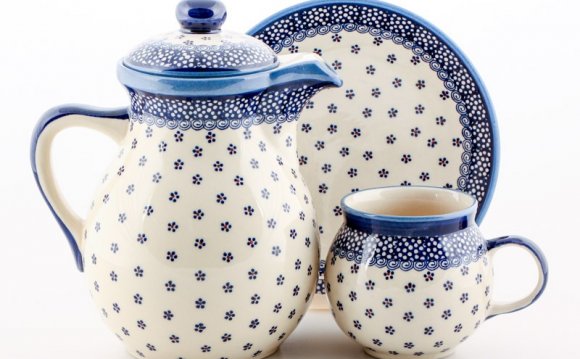 The art of making blue glaze pottery came to Rajasthan via Kashmir, their entry point into India. The name comes from the eye-catching Persian blue dye used to color the clay. The Jaipur blue pottery, made out of Egyptian paste, is glazed and low-fired. Some of this pottery is semi-transparent and mostly decorated with animal and bird motifs. Being fired at very low temperature makes them fragile. The range of items is primarily decorative, such as ashtrays, vases, coasters, small bowls and boxes for trinkets. The colour palette is restricted to blue derived from the cobalt oxide, green from the copper oxide and white, though other non-conventional colours, such as yellow and brown are sometimes included.

The use of blue glaze on pottery made from Multani mitti, or Fullers earth, [dubious  discuss] is an imported technique, first developed by Mongol artisans who combined Chinese glazing technology with Persian decorative arts. This technique travelled south to India with early Muslim potentates in the 14th century. During its infancy, it was used to make tiles to decorate mosques, tombs and palaces in Central Asia.

Later, the Mughals began using them in India to mimic their structures from beyond the mountains in Samarkand. Gradually the blue glaze technique grew beyond an architectural accessory to Kashmiri potters. From there, the technique traveled to the plains of Delhi and in the 17th century went to Jaipur. The rulers of Jaipur were partial to blue-glazed ware, and many marble halls in Rambagh Palace have fountains lined with blue tiles. These tiles were also used in the building of the city of Jaipur, but they disappeared soon after.