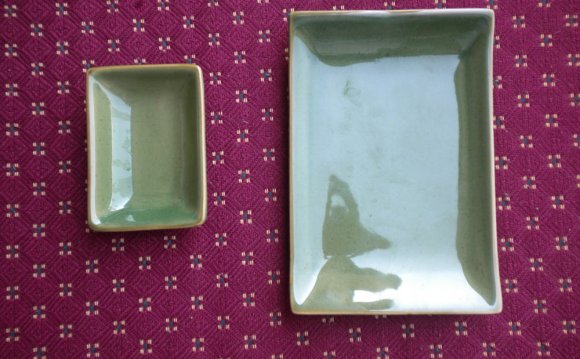 It usually falls into three main classes—porous-bodied pottery, stoneware, and porcelain. Raw clay is transformed into a porous pottery when it is heated to a temperature of about 500°C. This pottery, unlike sun-dried clay, retains a permanent shape and does not disintegrate in water. Stoneware is produced by raising the temperature, and porcelain is baked at still greater heat. In this process part of the clay becomes vitrified, or glassy, and the strength of the pottery is increased.

Pottery is formed while clay is in its plastic form. Either a long piece of clay is coiled and then smoothed, or the clay is centered upon a potter's wheel (used in Egypt before 4000 BC) that spins the clay while it is being shaped by the hand, or thrown. Decoration may be incised, and the piece is allowed to dry to a state of leather hardness before firing it in a kiln. The type of finish, depending on the kind or number of glazes, dictates the total number of firings. When slip and graffito are used, they are applied before the first firing. There are two types of fires—reducing and oxidizing. The former removes oxygen while the latter, a smokeless fire, adds it. Reduction and oxidation change the color of the fired clay and gave early potters their palette of red, buff, and black.

Pottery is one of the most enduring materials known to humankind. In most places it is the oldest and most widespread art; primitive peoples the world over have fashioned pots and bowls of baked clay for their daily use. Prehistoric (sometimes Neolithic) remains of pottery, e.g., in Scandinavia, England, France, Italy, Greece, and North and South America, have proved of great importance in archaeology and have often supplied a means of dating and establishing an early chronology. Some of the oldest pottery has been found in Japan and China, dated to at least 16, 000 and 20, 000 years old respectively. Pottery has also been of value as historical and literary records; ancient Assyrian and Babylonian writings have been inscribed upon clay tablets. Simple geometric patterns in monochrome, polychrome, or incised work are common to pottery of prehistoric and primitive cultures.

Pottery of the Ancient Mediterranean

By 1500 BC the use of glazes, such as the famous greens and blues, was known in Egypt. Especially noteworthy is the early Aegean pottery of the Minoan and Mycenaean periods with its curvilinear, painted decoration. In Assyria and Neo-Babylonia, painted and glazed bricks were in common use. The Ishtar gate in Babylon, with its ceramic reliefs, is an early example of the majolica technique.